Originally published in the Gotham Gazette 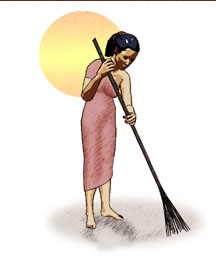 When Marjina, a young Bangladeshi woman working as a
live-in housekeeper for an Indian family in Dubai, was
invited to accompany the family to live and work in
the U.S., she jumped at the opportunity. To her,
America meant money and freedom. But soon after she
arrived to begin her new life, Marjina says her dreams
quickly dissolved.

“I thought they would treat me like a family member,”
she says, speaking in her native Bengali through an
interpreter. “But I was lied to.”

At the time, Marjina was unaware that she, like any
domestic worker — documented or undocumented — was
legally entitled to a work environment free from
exploitation and abuse. But unfortunately, employers
often thumb their noses at the law and ignore the
rights of their domestic help.

Indeed, Marjina describes a grueling work schedule
with little or no compensation: 18-hour days on Monday to Friday,
8-hour days on her “days off” during the weekend. She says she
was never allowed to eat until the family was finished, she
was forced to sleep in the basement with no mattress, and she
was made to shovel snow in the cold Teaneck, N.J. winter
wearing the only shoes she brought with her from Dubai: sandals.
During this time, she says, “I didn’t even know what
a U.S. dollar looked like.”

Marjina found an advocate in one of her employers’
friends, who located a Bangladeshi family in need of her services.
But according to Marjina, things went from bad to worse.

Her new employers forced her to work similar
backbreaking hours, Marjina says, and promised to pay
her a meager $400 per month, most of which she never
received. She was never allowed to leave on her own,
and alleges she was physically abused by the couple’s
mentally impaired son. After three months, Marjina
finally demanded payment, upon which she was locked in
a basement, then ordered to leave with only $375 cash.

Distraught and frightened, with no English and little
money, Marjina got on a bus, where she finally found
some luck. The driver spoke Hindi, and he took Marjina
to an Indian store where the owner called for help.
Subsequently, Marjina was put in contact with Andolan,
a Queens-based South Asian workers’ rights group. Last
fall Marjina filed a lawsuit against her former
employers, who deny all her allegations.

Marjina’s story is not an isolated one, according to many
advocates for workers’ rights, or even a particularly extreme
example of the abuse that many immigrant domestic workers face
on a daily basis. Ai-jen Poo, program director at the Women Workers
Project of in Manhattan, says that, “It’s the norm that people are
subjected to long hours, little or no overtime pay, low wages,
little privacy and a difficult environment.” For live-in domestic workers, things are even worse.”
(These workers) are often on call 24-7,” Poo says.

The problem is extremely difficult to quantify
accurately, because several groups, including the New
York City-based South Asian Workers Rights Project,
are only now starting to gather the hard data.

Experts estimate that ninety-five percent of immigrant
domestic workers are women of color, half of them undocumented,
and in many cases they work for people of their own ethnicity.
Typically, Caribbean and Latin American immigrants will find
jobs with white families through an agency,
whereas Asian women, particularly South Asian women,
will find jobs in upper class Asian families through
direct ads in South Asian newspapers. “The Asian-American community
is much more insular, and tends to hire more undocumented workers,” says Chaumtoli Huq, an attorney working with the South Asian Workers Rights Project. When an Indian family hires an Indian domestic, Huq says,
what separates them is not ethnicity, obviously, but class.

USING THEIR IMMIGRANT STATUS AGAINST THEM

The worker/employer relationship is inherently based
on an imbalance of power, an imbalance which employers
often use to intimidate their employees and prevent
them from leaving. “If employers can, they will use immigration
status as an added weapon,” says Nadia Marin-Molina of Workplace
Project.

This can take the form of an employer confiscating a
worker’s passport, keeping a worker in the house to
keep them ignorant of their rights and out of contact
with potential allies, threatening to turn an
undocumented worker over to the Immigration and
Naturalization Service, and holding out false promises
of a green card. Molina tells of one worker who was
promised green card sponsorship by her employer. After
10 years of working for low wages, she found out that
her employer had never even taken the first step to
sponsor her. And in any case, according to Chaumtoli
Huq, getting a green card rarely happens at all for a
domestic worker, and even if it does, it takes from ten to 15 years.

One might assume that even the most vindictive
employers would hesitate to turn an undocumented
employee over to the Immigration and Naturalization Service, because
they could be fined thousands of dollars for having violated the law by hiring the worker in the first place. But the standard to determine if an employer should be fined, Huq says, is whether the employer
knowingly hired an undocumented worker. All the employer has to do is say
they were ignorant of their employee’s work status.

Ai-jen Poo believes that employers take advantage of
their domestic workers simply because they can. “We
have to change the culture where all the power lies in
the hands of an employer,” she says. Poo points out
that domestic work is traditionally seen as women’s
work, which is devalued. “The work these women are
doing completely enables every other industry to
function — it’s crucial,” she says. “But it’s not seen
that way.”

Whatever society’s perceptions of the value of
domestic work, one fact is certain: domestic workers,
both documented and undocumented, are legally entitled
to the same basic rights any U.S. citizen should
expect. According to a pamphlet for workers put out by
the Women Workers Project, these rights include (but
should not be limited to) workers’ compensation
insurance, short term disability benefits, minimum
wage, overtime, meal breaks and one full day off each
week.

The problem is, many workers are not aware of these
basic rights, and even if they are, fear of employer
retribution may prevent them from seeking help. In New
York, several groups provide representation, education and
outreach to domestic workers in need.

The Women Workers Project has recently initiated an
effort to institute a standard, industry-wide contract
for domestic workers. While Ai-jen Poo admits that
such a contract may be difficult to enforce, she
stresses the need for a standard model and organized
support. Such an effort is dependent on numbers; the
more workers who are armed with the contract, the
better. Although the contract effort is in its
infancy, Poo says thousands of copies have already
been distributed to workers.

Chamtoli Huq cites two important elements in creating a better work environment for domestic workers. One is to support the contract campaign and the viability of enforcing such a contract, and the
second is to push for legislative change, such as the bill passed in the House May 9 that would offer protection from deportation to domestic workers who sue their employers. The bill, authored by Congressmen Christopher Smith (R-Trenton) and Sam Gejdenson (D-Conn), is currently awaiting a Senate vote.

But community outreach organizations remain a crucial
element in the fight for domestic workers’ rights,
because before a worker can take advantage of any of
their rights, they must first learn what those rights
are.

Shortly after Marjina met Andolan’s co-founder, Nahar
Alam, she found work with a new family, and says she
is now “very happy” with them. But even though she
currently makes $1,000 a month, Alam points out that
this is not even minimum wage given the hours Marjina
works. Marjina still gets no holidays. “It’s
still not enough,” Alam says.

Marjina says that she knows her rights now, and “will
tell other people to go to organizations (like
Andolan) when they come to this country.” As for what
she endured when she first arrived, she says, “Until
the day I die, I’ll remember this experience.”